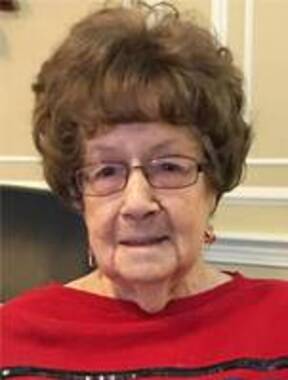 Back to Elizabeth's story

Derry, NH - Elizabeth S. Callahan, 95, of Derry, N.H., died Wednesday January 29, 2020 in Pleasant Valley Nursing Center in Derry.
She was born in Somerville, Mass. on April 22, 1924, a daughter of the late Frank and Sarah (Garland) LoSciuto She had been a resident of Derry since 2005, formerly living in Windham, NH. Elizabeth had been employed as a bookkeeper for Belotti Oldsmobile in Somerville, for many years. She was a member of the Londonderry Senior Center, and enjoyed knitting.
She is survived by three sons, John Callahan, Jr. and his wife, Christine of Lewiston, Maine, Stephen Callahan and his wife Mira of Gorham, Maine, and Daniel Callahan and his wife, Jean of Londonderry, NH; nine grandchildren, Janice, Annissa, Stephanie, Kristen, Robert, Jeffrey, Ryan, John and predeceased by Karolina; 13 great-grandchildren; one great-great-grandchild; and her niece, Irene DeCata of Woburn. She was predeceased by her husband, John "Jack" Callahan, Sr. in 2014.
Calling hours were held on Monday, February 3rd from 1 to 4 p.m. in the Peabody Funeral Homes and Crematorium, 15 Birch St., Derry. Funeral services followed at 4 p.m. in the funeral home. The burial will be in Pillsbury Cemetery, Londonderry in the Spring. To send a condolence please visit, www.peabodyfuneralhome.com.
Published on February 6, 2020
To send flowers to the family of Elizabeth S. Callahan, please visit Tribute Store.

Send flowers
in memory of Elizabeth

A place to share condolences and memories.
The guestbook expires on May 05, 2020.