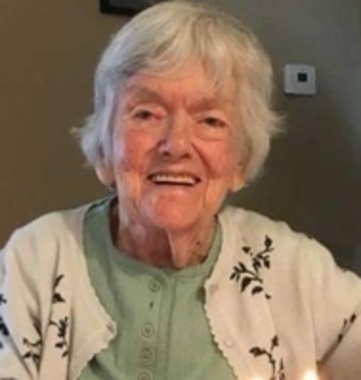 Back to Gladys's story

Derry, NH - Gladys (Hoisington) Richardson (formerly of Derry, NH) died In Kingstown, RI on January 22, 2020 at the age of 92. She had moved to RI in 2015. Gladys was born on March 17, 1927 in Derry, NH, to Goldie and Carlton Hoisington, the fourth of five children. She graduated from Pinkerton Academy in 1945. She worked as a telephone operator before her marriage to Harry Richardson in 1947.
Gladys raised five children and looked after her niece, Kim Browne Mitzel She worked part-time as a cook at Southrange Elementary School and helped her husband run Harry's Driving School. She volunteered at Parkland Medical Center, and she helped establish a food pantry in Derry. After retirement, Gladys and Harry enjoyed trips to visit their children and grandchildren on the West Coast. They also enjoyed trips along the Maine coast. They were married for 52 years until Harry's death in 1999.
Gladys is survived by her daughter, Nancy Vakalis and son-in-law, Harry Vakalis of Boston; daughter Patricia Gibson and son-in-law, Ray Gibson of Palm Harbor, Fla.; daughter, Barbara Prezioso and son-in-law, Jerry Prezioso of Narragansett, RI; daughter Suzan Tobin of Sacramento, and sister-in-law, Connie Hoisington of Manchester, NH. She is survived by her grandchildren; Christine Vakalis, Paul Vakalis, Sean Gibson, Marissa Gibson, Michael Prezioso, Matt Prezioso, Liam Tobin and Ryan Tobin, great-grandson, Cooper Gibson, and several nieces and nephews. She was predeceased by her husband, Harry Richardson and her son, David Richardson.
Following cremation, a calling hour will be held on Monday April 6, 2020 from 10 to 11 a.m. in the Peabody Funeral Homes and Crematorium, 15 Birch St., Derry with a memorial service to follow at 11 a.m. in the funeral home. Interment will follow at Forest Hill Cemetery, E. Derry, NH. To send a condolence or for more information, please visit www.peabodyfuneralhome.com.
Published on January 30, 2020
To plant a tree in memory of Gladys M. Richardson, please visit Tribute Store.

Plant a tree in memory
of Gladys

A place to share condolences and memories.
The guestbook expires on April 28, 2020.