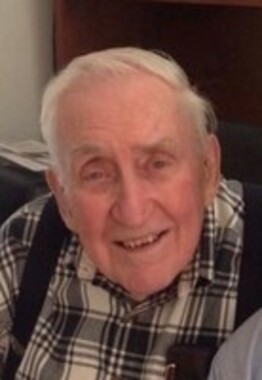 Back to Leroy's story

Nashua, NH - Leroy C. Noyes, 95, of Nashua, NH died Friday, January 31, 2020 at his home.
Mr. Noyes was born in Naugatuck, CT on April 16, 1924, a son of the late Lauriston and Mertie (Stowe) Noyes. He served with the US Army during WWII. After his marriage to Joanne (Lindgren) Noyes on June 23, 1949, they lived in Maine and parts of Massachusetts before moving to Chester, NH in 1977. Roy was very active in the Chester Historical Society and was a Pinkerton Academy Trustee for 27 years, where there is a room named after him.
He is survived by three children, Linda Johnson and her husband, Orrin of Eliot, Maine, Nancy Noyes of Eliot, ME, and Andrew Noyes and his wife, Ann of Bedford, NH, six grandchildren, Christine and Patricia Holmes, Samuel Noyes, Rebecca Kozura, Katherine Ames, and Elizabeth Noyes, four great-grandchildren, Maddy and Charlie Kozura, and Julia and Calvin Ames. He also leaves several nieces and nephews. He was predeceased by his beloved wife in 2002.
Following cremation, calling hours will be held on Thursday February 6, 2020 from 3 to 5 p.m. in the Peabody Funeral Homes and Crematorium, 15 Birch St., Derry. A memorial service will follow at 5 p.m. in the funeral home. In lieu of flowers, donations may be made to the charity of your choice. To send a condolence or for more information, please visit www.peabodyfuneralhome.com.
Published on February 6, 2020
To send flowers to the family of Leroy C. Noyes, please visit Tribute Store.

Send flowers
in memory of Leroy

A place to share condolences and memories.
The guestbook expires on May 05, 2020.